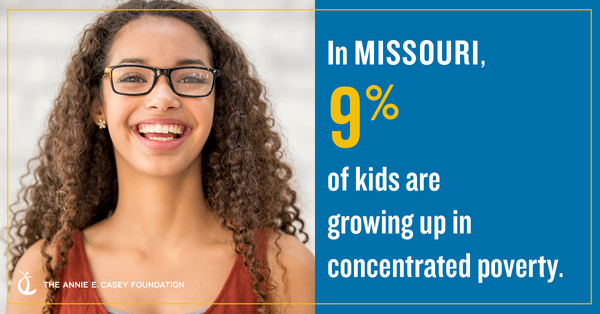 On September 24, 2019, the Annie E. Casey Foundation released “Children Living in High-Poverty, Low-Opportunity Neighborhoods,” a KIDS COUNT® data snapshot that examines where concentrated poverty has worsened across the country despite a long period of national economic expansion.

Growing up in a community of concentrated poverty — that is, a neighborhood where 30 percent or more of the population is living in poverty — is one of the greatest risks to child development and well-being. Approximately 12% of children in the United States, or more than 8.5 million children, live in these settings. Children in high-poverty neighborhoods are less likely than other children to have access to healthy food, quality schools, reliable medical care, and stable, safe housing. And children who grow up in high poverty neighborhoods are more likely to remain poor as adults.

While a small percentage of Missouri children living in concentrated poverty has declined, the experience of Missouri’s children has varied by key demographics such as race and age, and geographic location. The percent of white, non-Hispanic children in Missouri has ticked up from 4% to 5% between the study periods, while the percent of black children living in neighborhoods with 30% or more of households in poverty has declined from 33% in the 2008-2012 to 28% in the 20132017 period. Very young children (ages 0-4) are less likely to live in concentrated poverty areas than in the earlier period, whereas the percent of older children and young adults (ages 5-24) has remained generally consistent in Missouri.

Children living in Kansas City and the city of St. Louis (U.S. Census Bureau-defined principle city of metropolitan areas) are slightly less likely to live in concentrated poverty (30% in 2008-2012/27% in 2013-2017) than they were in the past, though over 75,000 children are included in this estimate. However, the both the number and percent of children living in concentrated poverty in non-metropolitan areas has increased modestly from 26,000 to 29,000 (8% to 9%).

“Here in Missouri, we work through 20 community partnerships throughout the state to ameliorate the impacts of concentrated poverty and other risks to families and children through supporting opportunities for parents to develop workforce skills as well as providing needed services and resources to children,” said Bill Dent, executive director of the Family and Community Trust (FACT).

The Casey Foundation urges leaders — from the national and state level to counties, cities and other local settings — to act now to help families lift themselves out of these circumstances. Policies at the community, county and state levels that can have a significant impact on the lives of children in struggling families include:

Ending housing discrimination based on whether a person was formerly incarcerated or is using a federal housing voucher.

Developing and funding small-business loan programs that serve entrepreneurs in low-income neighborhoods and communities of color — or people that traditional lenders tend to reject, such as individuals with poor credit or criminal records.